Art4Equality is an initiative launched in 2019 supporting equality themed art exhibitions and special projects including films and public art by female identifying artists and allies.

The mission of Art4Equality is to create empowering artwork and exhibitions that can impact social change, raise awareness and inspire our community. Art4Equality additionally facilitates opportunities by providing mentorship to artists, as well as special programing such as panel discussions, performances, and educational art events.

Art4Equality empowers by creating a platform for progress. By supporting the work of underrepresented and marginalized artists, Art4Equality demonstrates the value, quality, and diversity of their contributions to the community, encourages an inclusive dialogue, and promotes equality for all.

Total Number Of Professional Artists in The US as Measured by the Bureau of Labor Statistics. (www.arts.gov)

MFA graduates are women (Artnet News). More than 46% of total visual artists are female according to 2019 Report by National Endowment of The Arts.

Representation of female artists in museums and galleries. Out of over 10,000 artists in the permanent collections of 18 prominent art museums in the U.S., 87% are male (Public Library of Science) 13.7% of living female artists are represented by galleries in Europe and North America. (Artnet News)

Solo exhibitions in the US at major institutions devoted to women artists out of 590 major exhibitions by nearly 70 institutions reviewed. In another study of 820,000 exhibitions across the public and commercial (gallery) sectors in 2018, only one third are by female artists. (The Art Newspaper)

Artworks by women sold at auction between 2008 – 2019. More than $196.6 billion has been spent on art at auction during this time frame, of this work made by women accounts for just $4 billion. (Artnet News)

5 of the 150 statues in the New York City outdoor public spaces honor women. City Hall has recently confirmed (in March 2019) an additional 4 to be installed bring total to 6% female. (New York Times)

2 works by women have ever broken into the top 100 auction sales for paintings, despite women being the subject matter for approximately half of the top 25. (Artsy, Art Market 2019 Report)

Latino artists are the most underrepresented, making up only 1.2% of artists represented by New York galleries despite being the largest minority group in the U.S., making up 18% of the nation’s population. (Artnet News, 2017)

– National Endowment of the Arts, April 2019

Female Artists Made Little Progress in Museums Since 2008. In the past decade, only 11 percent of all work acquired by the country’s top museums was by women.

Why Is Work by Female Artists Still Valued Less Than Work by Male Artists?

African American Artists Are More Visible Than Ever. So Why Are Museums Giving Them Short Shrift?

“Yes, Basquiat Is an Art-Market Superstar. But the Work of Other African American Artists Remains Vastly Undervalued”

Art4Equality facilitates opportunities by providing mentorship and guidance to artists in need.

Learn About Our Founder 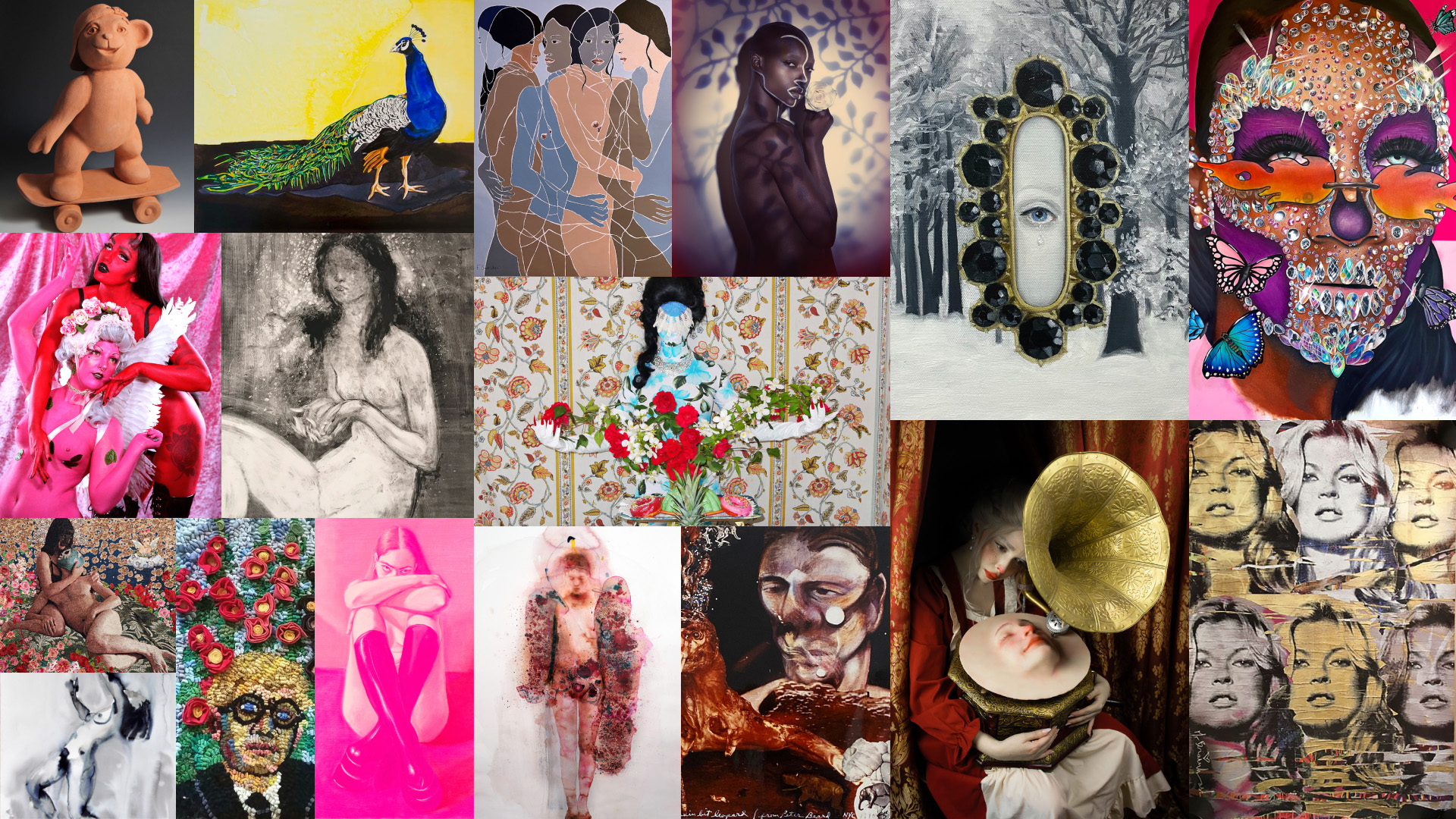 “Rapture” Benefit Art Auction: The Untitled Space & Art4Equality Invite You To Share Your Love Of Art This Holiday Season With Artworks By 25 Artists Supporting The Homeless – Launching December 14, 2022

The Untitled Space gallery has teamed up with Art4Equality for a benefit holiday art auction “RAPTURE” featuring over 100 artworks by 25 artists supporting the homeless crisis. A portion of proceeds raised from the benefit will be donated to Coalition for the Homeless, the country’s oldest advocacy and service organization helping homeless individuals and families. The Coalition’s life-saving programs provide food, crisis services, housing, and more to over 3,500 people each day.

Give the gift of artwork this holiday season and support those in need!

View auction lots and register to bid online at untitled-space.art 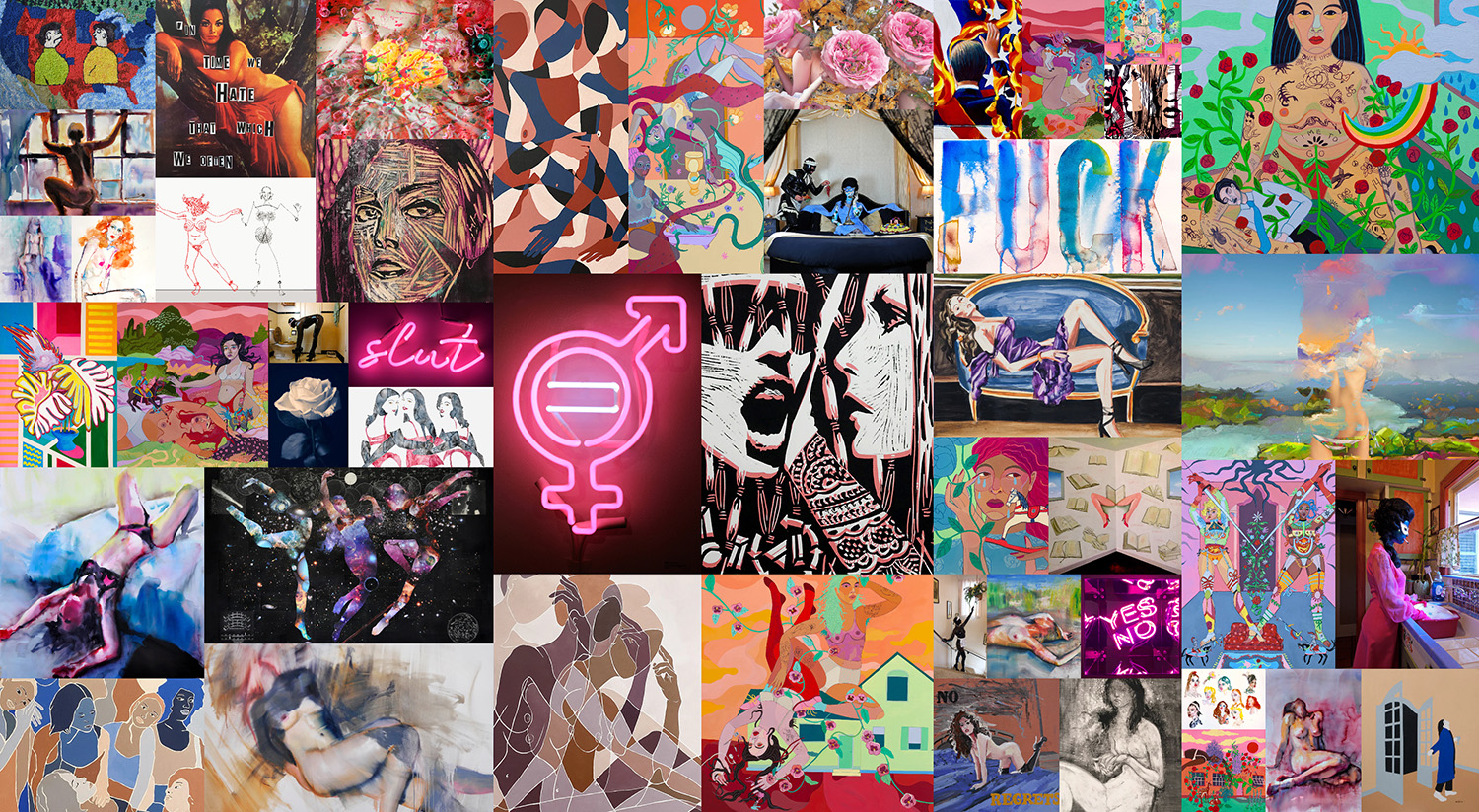 The Untitled Space gallery is pleased to present our benefit auction “MY CHOICE” presented in collaboration with Art4Equality, a non-profit initiative supporting equality-themed art exhibitions and special projects including films and public art by female-identifying artists and allies. A portion of proceeds raised from the benefit will be donated to reproductive rights organization, The Center for Reproductive Rights, a global human rights organization of lawyers and advocates who ensure reproductive rights are protected in law as fundamental human rights for the dignity, equality, health, and well-being of every person. 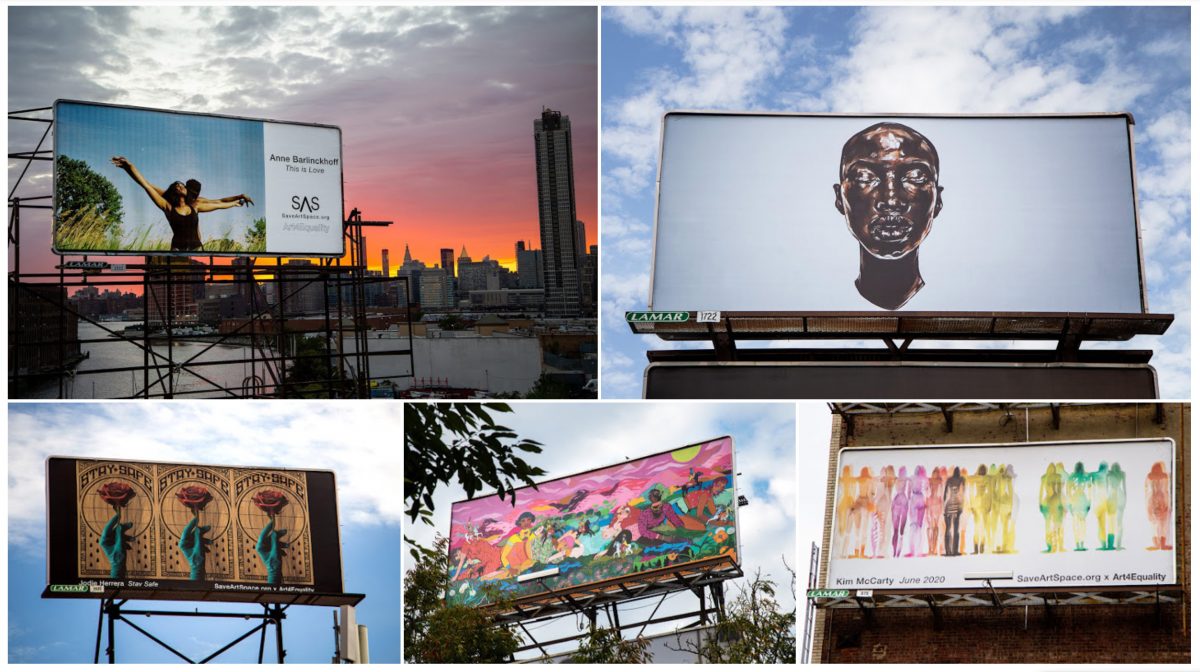 Artwork featured in “Art4Equality x Life, Liberty, The Pursuit of Happiness” Exhibition and Public Art Series Presented by The Untitled Space in collaboration with SaveArtSpace and Art4Equality

Artwork featured in “Art4Equality x Life, Liberty, The Pursuit of Happiness” Exhibition and Public Art Series Presented by The Untitled Space in collaboration with SaveArtSpace and Art4Equality

“Art4Equality x Life, Liberty & The Pursuit of Happiness”
A Group Exhibition and Public Art Series
Presented by The Untitled Space in Collaboration with SaveArtSpace and Art4Equality

The Untitled Space is pleased to present a group exhibition and public art series “Art4Equality x Life, Liberty & The Pursuit of Happiness” presented in collaboration with SaveArtSpace and Art4Equality.  The two-part exhibition features an empowering public art series of 10 billboards each by different artists launching on September 21, 2020 in a variety of locations throughout New York City, to coincide with a gallery exhibition opening on September 26, 2020 at The Untitled Space featuring the work of over 50 contemporary artists. Revolving around the theme of “Art4Equality x Life, Liberty & The Pursuit of Happiness” the public art series and group exhibition is curated by Indira Cesarine, founder of The Untitled Space and Art4Equality. The gallery will feature the unique artworks displayed on the billboards (presented by SaveArtSpace) along with an exhibition of many additional works in a variety of mediums including painting, drawing, photography, video, and sculpture inspired by the words “Equality,” “Life,” “Liberty,” and “The Pursuit of Happiness,” which will be on view at the gallery through October 17, 2020. The Untitled Space is honored to collaborate with non-profit SaveArtSpace and support the programming of Art4Equality, an initiative that supports the creation of empowering equality themed exhibitions and public art.

Curatorial Statement: “We live in an unprecedented time, our liberties robbed by a global pandemic, which laid painfully bare the inequities that have plagued the most vulnerable in our society for far too long. Political polarization in the United States is reaching critical mass with a divisive political system at war. Realities of social inequality and racial injustice are challenging our ability to have confidence in a promising future. With the 2020 elections approaching, I felt that it was a crucial time to create an opportunity for artists to respond, with the artwork presented in a public platform where it can reach an audience of millions of people every day and promote an inclusive dialogue. The billboard transformed into an art display is an innovative, and ultimately accessible way to present contemporary art, transforming spaces normally dedicated to advertising into public art that has power and impact. We received such an overwhelming response to the exhibit opportunity, which was presented via an open call, that I expanded the project to include a gallery group exhibition featuring over 50 artists who created artworks inspired by the theme – most of which were created during quarantine. The public art series and exhibition “Art4Equality x Life, Liberty, & The Pursuit of Happiness” seeks to empower, enlighten, and shed a ray of hope in a city that has been under a dark cloud, in a country that is in tatters not only by an invisible virus, but also by political and civil unrest. As we navigate through this difficult time, “Art4Equality x Life, Liberty, & The Pursuit of Happiness” celebrates art as activism, giving voices to a diverse array of contemporary artists from all backgrounds, ages, and genders. I’m honored to guest curate the public art series for SaveArtSpace and hope viewers will be inspired and motivated by the public art billboards and exhibition artwork.” – Curator Indira Cesarine

Founded in 2015, in Brooklyn, NY, SaveArtSpace is a non-profit organization that works to create an urban gallery experience, launching exhibitions that address intersectional themes and foster a progressive message of social change. By placing culture over commercialism, SaveArtSpace aims to empower artists from all walks of life and inspire a new generation of young creatives and activists. Since 2015, SaveArtSpace has installed the artwork of 180 artists on 212 advertising spaces in 10+ major US cities, coast-to-coast. Beyond transforming advertisement space into public art, we work with a variety of community groups including: schools, senior residencies, shelters, youth groups, special needs programs, art collectives, galleries, and museums. Together, we aim to foster community and cultural enrichment through the arts. While supporting underprivileged and emerging artists by providing them the opportunity to display work in the public space.

ABOUT THE UNTITLED SPACE
https://untitledspace.com 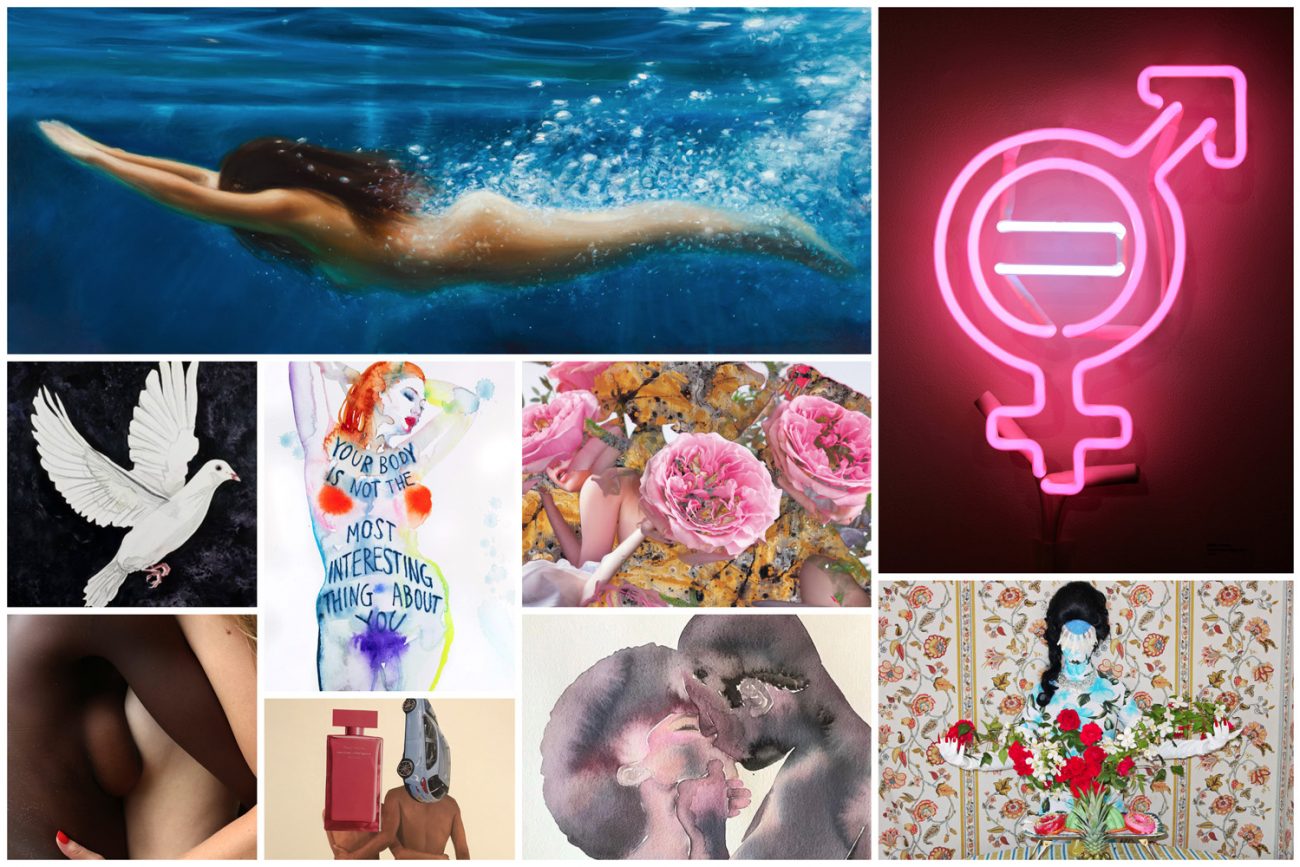 The Untitled Space is pleased to present a benefit group exhibition in support of Art4Equality featuring a revolving show of artworks throughout the month of January 2020 that will raise funds for the initiative presenting equality themed exhibitions and public art.

Art4Equality has partnered with The Untitled Space and Paddle8 for an inaugural fundraising auction kicking off with a preview on January 23rd with bidding live from January 30 – February 11, 2020.

The Art4Equality x Paddle8 Benefit Auction features over 200 artworks by more than 60 artists coming together to raise funds for Art4Equality’s future programing and equality focused projects.

Join Us In Supporting Art4Equality